Agatha Christie, The Queen of Crime: My Reflections 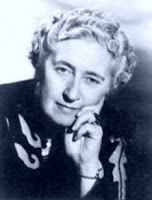 It has been a fun week for bloggers and Agatha Christie fans, particularly those who've been following the Agatha Christie Blogging Tour that Mysteries in Paradise started and to which I am honored to participate. So far this week I've enjoyed reading an assortment of posts on the tour that range from reviews of her books, to photographic journals taken while touring Dame Christie's home, to quizzes and other interesting facts about the author. It has indeed been a very fun week!

I cannot remember now which book was my first Agatha Christie read, but I remember that from the first I've always been a fan. Since the early years of my teenage life I've read several Christie novels, but it was only last year that I set my own reading challenge when I decided to start from the beginning and read through all of her mystery/crime novels by order of publication. To date I've read 17... or rather 18 (see note below).

I didn't make much progress in 2008, as I had only read seven by the end of the year: The Mysterious Affair At Styles (no review), The Secret Adversary (no review), The Murder on the Links (no review), The Man in the Brown Suit, The Secret of Chimneys, The Big Four, The Mystery of the Blue Train. (Note: I skipped over The Murder of Roger Ackroyd because I'd read it just a year or two earlier and remembered too much of the plot to feel I could read and review with fresh eyes. Because of this I've changed my reading number from 17 to 18.)

It was towards the end of December 2008 that I started counting and realized if I didn't pick up the pace in reading her books then it could take me upwards to 10 years to finish my own challenge! And that was a bit daunting... So at the start of 2009 I began my new goal of reading at least one Christie novel a month, with the hopes of finishing 12-15 by the end of this year.

It's now September and I am on target with 10 books read thus far: The Seven Dials Mystery, The Murder at the Vicarage, The Sittaford Mystery, Peril At End House, Lord Edgeware Dies, Murder on the Orient Express, Why Didn't They Ask Evans?, Three Act Tragedy, Death In the Clouds and most recently The A.B.C. Murders.

Out of all 18 Christie mysteries I've read there hasn't been one I didn't enjoy, but there were definitely some that, in my opinion, were better than others. My personal favorites have included: Murder on the Links, The Man in the Brown Suite, and The A.B.C. Murders.

I'm amazed when I stop and think about the number of mysteries Christie penned. In addition to the 66 mystery novels Christie also wrote 160 short stories and yet, to date, I've not found one story that is too much like another. Yes, from time to time there are similarities (especially when she's taken an idea from a short story and years later expanded it into a novel), but for the most part the plots are fresh and the solution to the mystery is never the same. A reader is guaranteed, when picking up one of her books for the first time, to find a new "Who-dun-it" to puzzle over regardless of what they've read in the past.

What I like most about Agatha Christie's novels is that they are equally entertaining and mentally engaging. Part of me likes to sit back and just watch the mystery unwind and the other part of me likes the challenge of trying to solve the crime ahead of or at least at the same time as the lead detective. Because so many of her early works contained Hercule Poirot as the lead detective I've not had much time to solidify my opinion of the other detectives, but at this time I can honestly say I really like Hercule Poirot. Years ago I thought he was conceited and annoying, but I've really come to respect his methods and sense of humor. I also appreciate the "tastefulness" of her crime novels. That is to say, murder and mayhem is never pleasant, but Christie's writing style and choice of words keeps the story clean as she avoids unnecessary profanity or sexuality and the grotesqueness and baseness to which many modern writers fall. Of course this is mostly due to the time and place she wrote her novels, but nevertheless I appreciate it.

Yes indeed, Agatha Christie was a great writer and I think it well that she has been dubbed, "The Queen of Crime."
Posted by Sarah M. at 1:28 AM

I've been an Agatha Christie fan since my teenage years, although it was only a few years ago that I started to read her books again and found there were so many I hadn't read. Like you I love the challenge of solving the crime as well as just enjoying the reading, knowing that whatever murder has been committed I'm not going to be faced with the horror that some crime writers inflict.

I,too, started reading Agatha Christie in my teens. Reading Christie was a family tradition and my mother had all of them and gave the new ones as Xmas presents, these were then circulated around the clan. I think I have read all of them and still occasionally reread them for comfort. At Bertram's Hotel, 4.50 from Paddington, and Murder at The Vicarage are some favourites.

I'm very impressed. =) Not only did I learn more about you and your goals, but about Christie too. And you are starting to motivate me to read more of her stories for myself. However, your love for Betsy-Tacy has taken over my bookshelf at the present moment.

Still, I loved reading this post and seeing you document your progress!

The natural progression from my 12 y/o obsession with Nancy Drew was Agatha Christie. I've loved her since, but I think my devotion was sealed by Joan Hickson in the BBC's Miss Marple series. Love, love, love.

Like you, I'm addicted to this reading challenge. To date, I've read 18 of her novels and reviewed 18 of them on my blog.

I can't remember either what the first Agatha Christie book I read either. I only know that my mother introduced me to her, and for that I'm eternally grateful.