It's been a very busy week, but I have much to be thankful for. My top five favorite moments from this past week include:

1. Finally getting some time to read. I'm working my way through Anthony Trollope's The Way We Live Now, which I need to finish before the next book club meeting (June 2). It's 802 pages and I had planned to read a certain number of pages a day, which just hasn't happened. So now I'm in a rush. I have two weeks left and half the book to read. My reading time has been snippets here and there, mostly before the hour of 7am and after the hour of 10pm, still it's a great story and I'm thoroughly enjoying it. 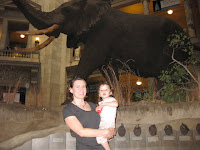 2. A little time away. I wasn't able to post last Friday as I took the day off to go sight-seeing with a friend and her daughter who were in from out of town. It was her first time to the area and there was much to see. But you can't really rush when you are walking with a two-year-old. Still, we had a great time. After a quick lunch my friend and her daughter headed to their next 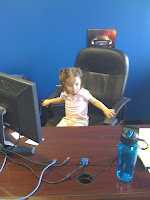 appointed tour and I took my daughter off for a spontaneous visit to my husband's office. It was really fun to watch L "see where Daddy goes every day." And then best of all, after he got off work (his boss let him out early) we went out for dinner to Pei Wei, a fast, but delicious Asian restaurant. It was a very enjoyable and relaxing Friday.


3. Which leads me to my next thought. On Friday evening I received some sad news. One of my brother-in-laws is seriously ill and has been waiting for a while to find out if he will be approved for major surgery that could radically change (improve) his life. The answer came Friday and it was "No." The surgery was too high risk and the doctors just will not or can not perform it. This was a big blow to my sister and her husband, especially because just a week prior they had run into two success stories, which for this type of surgery is rare. It was almost as if the carrot (a life without pain and restrictions) was dangled in front of their noses only to be yanked away a week later. I immediately thought of Natalie Grant's song I Will Not Be Moved, which is currently on my playlist. The video's a bit weird, but I love this song.

4. On a lighter note, my daughter's curiosity and vocabulary continue to expand. She often says things that make my husband and I struggle not to laugh out loud, especially when she's being very serious. The other day we were driving somewhere and the sun was just peaking out behind the cloudy sky. The following conversation reminded me of a scene from Shakespeare's The Taming of the Shrew (Act 4, Scene 5):
L: "Mommy, see the moon?"
Me: "No, that's the sun hiding behind a cloud."
L: "No, it's the sun."
Me: "I'm pretty sure it's the sun."
L: "NO. It's the moon." ...

5. And silly as it might sound, another favorite moment from this week has been yesterday and today. For most of the week it's been cloudy and raining, but finally yesterday, the sun came out! I love sunshine and it's so nice to be able to open the windows or take a walk to the park. If only the nice weather will hold out for the weekend.

I am so sorry to hear about your BIL. I will be thinking of your sister and praying for their whole family this coming week. GREAT song and truth to hold onto right now. Praying!

On on that lighter note - glad the sun came out for you (or the moon?) and I hope you enjoy your weekend!