Monday Children's Picks of the Week

Two weeks ago we had a week long heat wave where temperatures hit above 100 for several days. It was awful. In an effort to keep my daughter and myself from going insane with cabin fever and yet keep cool I planned a trip to the city branch of our county library. It was a great idea... only several other parents had the same thought and it resulted in some hot and crabby children who didn't play well together in the children's play area and weren't really in the mood to look at books.
Still, we came away with some great finds. Here are two of my favorites from our recent reads: 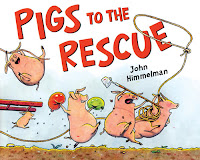 Pigs to the Rescue by John Himmelman (Published by Henry Holt and Company through Macmillan April 2010). And yes, this is the "sequel" to Chickens to the Rescue. I didn't think Pigs was quite as good as Chickens, but it was funny and a cute read. I suspect by the ending that Himmelman might be planning a third installment titled Cows to the Rescue. I will be watching for that one in a year or two. 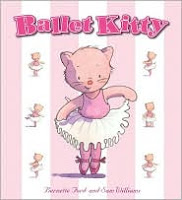 Ballet Kitty by Bernette Ford (Published October 2007 by Sterling Publishing). This is the first in a series of Ballet Kitty books. As one might guess the Ballet Kitty stories are about a little girl cat who loves ballet. They are short and sweet and fresh. Perfect as a read aloud to a little girl who likes anything ballet... (Ahem... like my daughter who is.... slightly obsessed.) You might recognize Bernette Ford's name as she is also the author of the No More Diapers For Ducky and No More Pacifier for Piggy stories.

Today was story time at our local library branch and we came back with another bag full of books to read. I've only had a glance, but I'm sure I'll have more titles to tell you about next week.
Posted by Sarah M. at 1:23 PM