Monday Children's Picks of the Week

A little over a month ago I participated in several book give-aways online. Low and behold I actually won one of these give-aways over at Reading to Know!

My prize was a set of seven books called "Modern Art for Babies" published by Tundra Books. Personally I don't consider this set of books for babies. While they could be read aloud to an infant they are much more suited for a toddler or preschooler.

Each of the seven books were written by Canadian author Marthe Jocelyn and illustrated by her husband, Tom Slaughter. What I like so much about these books is connected to the joint efforts of this husband and wife team. The text of the books explore everything from the alphabet and counting to shapes and simple concepts a child might encounter any given day. I also enjoyed the "modern art" illustrations. They are warm with colors drawn from the primary color pallet and are also simple and crisp and easy for a child to identify. Together with the text (be it letters, words or numbers) the illustrations provide interesting and fun visuals for a young child who is looking at the book on their own. 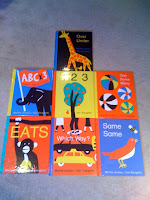 While some of the titles are self-explanatory here is a brief summary of each book from most newest to oldest in the set:

Which Way (Published in 2010) This book opens with the question: "How do we know which way to go?" and proceeds to explore the concept of directions, directional signs and what they mean, as well as how we travel (eg. by foot or by plane, etc.)

Same Same (Published in 2009) This book is a fun one to read aloud because it compares items and creatures that are similar or have similarities. For example on page one you begin with the shape "round" and how it is similar to objects like the Earth or a tambourine. Then the focus shifts to compare objects by what they do, like a tambourine makes music as does a guitar and a bird. From here the reader is directed to actions such as birds fly, as do planes and bees. Eventually the story comes full-circle by ending with the same apple that was seen on the first page of the book.

Eats (Published in 2007) As might be guessed by the title this book examines the concept of food and how each creature eats a particular type of food. A worm eats an apple, a bird eats a worm, a squirrel eats acorns, etc. ending with a question of who eats ice cream.... leading the child to cry out: "Me!"

ABC x 3 English * Espanol * Francais (Published in 2005) Again as is evident from the title this book the topic studies not only the alphabet, but how the alphabet fits into language and not just one language, but the three specific languages most commonly found in North America. First the reader begins by noting the letter of the alphabet in both upper case and then lower case (eg. Ff). Next a picture of something named with that letter is illustrated (eg. flower), and last the object is spelled out in English, Spanish, and French (eg. flower, flor, fleur). It is up to the reader whether only one language (the child's own) is taught or whether the other two are included.

Over Under (Published in 2005) This book compares opposites such as over and under, big and small, square and round, or light and dark. Each word is paired with a picture.

One Some Many (Published in 2004) This book dives deeper into the world of counting, growing beyond counting items from one to ten and actually exploring when you have "one" of something or "some" of that, or "many" of those. This might be an introduction to very simple math for a pre-schooler.

1 2 3 (Published 2003) This book, published a year prior to the aforementioned One Some Many, covers basic counting from one to ten as well as counting one to ten objects on a page. This is a great picture book to help a child who is learning to count.

Overall I am very pleased with this collection of books. My daughter has already spent countless hours over the last month flipping through the books and "reading" them aloud to herself. Although I've not taken any time this summer to read these particular books to her I plan to make much use of them in the coming months as her thirst for learning and her ability to sit still expands.

If you haven't checked out Marthe Jocelyn and Tom Slaughter's books before I highly recommend that you start with your local library. They are definitely worth checking out and sharing with your preschooler.

In closing I'd like to thank Tundra Books for giving away this set. I believe they are definitely an asset to my daughter's personal library. I would also like to thank Carrie at Reading to Know for the opportunity to win such a set. Thank you!
Posted by Sarah M. at 6:38 AM

I so wanted these books. I'm glad they went to someone I know and that you love them. Guess this means I'll have to get my hands on them, too.