N or M? by Agatha Christie 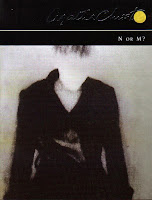 Ask just about any reader to name one of Agatha Christie's detectives and I'm sure you'll hear the names Miss Marple and Hercule Poirot. But if they mention the names Tommy Beresford and Tuppence Cowley, then you know you are talking with an avid Christie fan. Agatha Christie's Tommy and Tuppence stories only total four novels and one short story over the span of 51 years whereas Hercule Poirot appeared in no less than 33 novels and 51 short stories during that same span of time.

Tommy and Tuppence are first introduced in Christie's second novel, The Secret Adversary** published in 1922. The pair then made one more, albeit brief, appearance in the 1929 short story Partners in Crime before fading so far to the background of Agatha Christie's writing that they disappear completely for nearly two decades. It is not until 1941 during the midst of World War II that Tommy and Tuppence return in the spy thriller N or M?

I can only imagine the excitement Christie fans must have felt when they learned she had written another Tommy & Tuppence story. Finally after nearly twenty years we get to enjoy another thrilling adventure with this duo and finally find out where they have been and what they have been doing for the last 20 years! Well, that's what I imagine fans must have thought -- it's what I thought and I only had 1.5 years of waiting.

(** Unfortunately I read The Secret Adversary before I began this blog so I do not have a review written that I can refer you to. It was an excellent story and a must if you plan to read any of the Tommy and Tuppence books.)

N or M? -- The Plot:
"This atmospheric story, set during World War Two, finds Tommy and Tuppence doing what they do best – having an adventure. These unlikely Intelligence Service spies decide to help Queen and country by tracking down two ruthless traitors. The only clue to the traitors’ identities is a government agent's dying words that lead them to the Sans Souci boarding house, where it’ll take some extremely subtle detection work to establish which of the guests are the treacherous N and M." (Summary courtesy of AgathaChristie.com)

My Thoughts:
I found N or M? to be just exactly what I had hoped -- a thrilling spy novel that contained all the elements that make a novel a delight to read. There was suspense and mystery, there was comedy and sweetness, there was adventure and villainy. As for Tommy and Tuppence, they may have aged some, but they were every bit as endearing to me in this story as they were in The Secret Adversary. I especially liked the fact that Christie let them grow up and mature. They weren't reckless youths anymore, nor where they stodgy middle-aged couple. They were themselves -- intelligent, adventurous, and witty, but also a tad wiser and maybe with a gray hair or two.

If I had to compare Tommy and Tuppence to another fictional pair I would pick Nick and Nora Charles from the Thin Man movies (NOT the book), although with a lot less alcohol. I loved Nick and Nora in the Thin Man movies. There was something about their characters -- their wit and sarcasm and how they related to each other that made them a delightful couple. I have the same feeling when I read about Tommy and Tuppence in N or M? They make for an entertaining read.

As for the mystery itself -- Christie scores again! I picked up on numerous clues, but didn't know how they fit together until they were revealed. And as I drew closer to the end of the book I couldn't put it down. In the end I was up very late reading and thinking to myself, "How is it possible for one woman to write so many excellently thrilling stories?" There is a reason that I am such an avid fan of Agatha Christie and that she is the all-time best selling mystery writer. She was such a creative and clever storyteller. N or M? may not be her best work, but it's definitely an excellent read and shows what a diverse novelist she was. Too bad there hasn't been a Masterpiece adaptation.

Here are a few interesting facts about N or M?:

* The title of this book: N or M? plays a central role in the story, but it originated from a catechism in The Book of Common Prayer, which asks, "What is your Christian name? Answer N. or M."


What's next in my Agatha Christie reading challenge?: The Body In the Library. Stay tuned.

Absent In the Spring by Mary Westmacott (a.k.a. Agatha Christie) (1944)

* Christie's novels written from 1920 (The Mysterious Affair at Styles) through 1923 (Murder on the Links) I read before I began this blog hence no reviews are currently available.

I love this book, as well as most of the other Agatha Christie novels I've read. And as much as I've liked all of the Tommy and Tuppence books which I reread every now and then. But it's been a while since I reread this particular one. I do remember, though, one specific scene. The moment in which Tuppence figures out the identity of M (I think it was M, well it was either M or N.) because of an incident on the perilous edge of a cliff. (Don't want to be a spoiler.) I think you'll know what I mean. Brilliant deduction, Tuppence!

Normally, Agatha Christie is 'comfort' reading for me. When I'm ill, especially, very little else will do. I'm currently working my way through your Christie review list to see if your comments and opinions jibe with mine. Lots of fun.