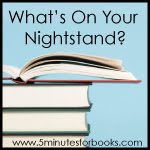 The summer is more than half over (boo!) and I've not gotten in as much reading as I'd like; still, I am making some progress.

After many years of good intentions I finally began reading Vanity Fair this month and have made a reasonable dent in the story. I have hopes of finishing it before the end of the summer, but we shall see since I also have another weighty tome awaiting me in August, but more on that later. In addition to Vanity Fair I also picked up This Side of Paradise by F. Scott Fitzgerald. The latter was something of a whim selection. I read The Great Gatsby in April 2010 and was surprised to like Fitzgerald's writing style, so I thought I'd give his first novel a try. I expect to have it finished within the next few days.

Aside from finishing these two novels the following are waiting on my nightstand:

A Caribbean Mystery is the next in my personal Agatha Christie Reading Challenge, which I began in 2008. In order to finish this reading challenge I have endeavored to read at least one of Christie's novels each month, though sometimes I read more. As things stand I am set to finish this challenge early next year.


The Man in the Iron Mask by Alexander Dumas is another novel that has long languished on my TBR list. I must admit I've never read Dumas (I know!), but I love the story of The Count of Monte Cristo. I know little to nothing about The Man in the Iron Mask, so it seems fitting to begin with this novel. Plus, I've sort of joined a challenge with Carrie at Reading To Know who also plans to read this book in the next month.


To add to that, my next book club meeting is the week following Labor Day. We are to read the fourth chapter of Passion of the Western Mind along with two medieval plays: Sir Gawain and the Green Knight translated by J.R. Tolkien andThe Song of Roland translated by Dorothy Sayers
And that's that. Although, now that I've written it all down I realize how much I've taken on. It is highly unlikely I will finish it all, but I am going to do my best and see what I can read in the waning weeks of summer.

Well that's all for me. What about you? Leave me a comment and let me know what is on your nightstand, or better yet, stop over at 5 Minutes for Books and link up your own Nightstand post. Happy reading!
Posted by Sarah M. at 11:04 AM

Lots of classics here - pretty impressive! I haven't revisited authors like Dumas and Fitzgerald since college, but just hearing the book titles brings back memories. :)

I enjoy Fitzgerald's style more than many 20th century American authors, too. I've never read anything by Dumas!

I really enjoy Dumas' writing. I hope you like The Man in the Iron Mask! I haven't read it yet, though I've seen several movie adaptations. Do you plan on watching the movie after reading the book?

The Song of Roland is a very good book. I've read it several times.
The Man in the Iron Mask is the third part of The Vicomte of Bragelonne, which is the last book of the series that starts with The Three Musketeers. I read Dumas' series in order and years ago, but I think you won't have any problems reading the last book first if you know who the main characters are. I hope you like it :)

I read The Three Musketeers last year and really enjoyed it. I think I might have to pick up the next book in the series and anticipate eventually getting to The Man in the Iron Mask. :)

Every month I see your list and think, "I want to read another Agatha Christie book." Several times I've even plucked one from the shelf, only to have to put it back again. Eventually, right?

In the meantime, yes, I AM with you still on Man in the Iron Mask. I just forgot to say so!!