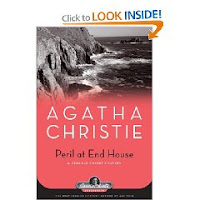 Finally! After the last couple of mediocre works by Dame Agatha Christie I came upon the little known, but captivating read Peril At End House.

Set approximately a year after Poirot solved The Mystery of the Blue Train this novel opens as Hercule Poirot and the ever-faithful Hastings are vacationing at the Majestic Hotel in the resort town of St. Loo in the south of England. The Majectic sits just down the coastline from a mysterious and imposing old estate known as End House. "Though the house is intriguing, its reckless young mistress, Nick Buckly, is even more so. She has narrowly escaped a recent series of life-threatening accidents, and something tells the Belgian sleuth that these so-called accidents are more than just coincidences or a spate of bad luck. Someone is trying to do away with poor Nick. But who? And what is the motive? In his quest for answers, Poirot must delve into the dark history of End House. The deeper he gets into his investigation, the more certain he is that the killer will soon strike again. And this time Nick may not escape with her life." (Courtesy of inside book flap.)

From the start Peril at End House is a fast paced mystery filled with twists and turns that keep the reader turning page after page until the hour is late and the reader tired, but amazed that Christie has managed to pull another one over them. Although I caught on to several clues and solved a few of the mysteries within the mystery I admit I was taken completely by surprise when I reached the end. Even so, I really enjoyed Peril at End House and wonder that it is not more widely known amongst Christie fans.

Peril was first published in the United States in 1932 before being released in the UK. It is the 12th mystery/crime novel by Dame Agatha Christie and the seventh featuring Hercule Poirot. Although as always it is Poirot who solves the crime he is adided in this mystery by his long-time friend Arthur Hastings and also by Scotland Yard's Chief Inspector Japp. On a scale of 1-5, 1 being horrible and 5 being excellent I would rate Peril at End House a 4. I really enjoyed this book and list it amongst my current favorites by the Queen of Crime.

As a side note, after finishing the book I discovered that in 1990 BBC adapted Peril at End House for Television starting David Suchet and unlike some of the most recent adaptations, this one is reported to be quite faithful to the book. I've yet to see the film, but have added it to my library video list.

Peril At End House completes my required reading for March, but if I have time I may attempt to read the next, Lord Edgware Dies, before the month is out. Stay tuned.
Posted by Sarah M. at 3:46 PM

I actually just watched the David Suchet version of this recently, and it's quite good. I don't remember the book all that well, but from what little I do recall the movie seems to follow it accurately.

Thanks again Sarah for contributing to the Carnival.
http://acrccarnival.blogspot.com/2009/03/arcr-carnival-3.html
There were 2 reviews of PERIL submitted. It was interested to see the differnt things you each picked