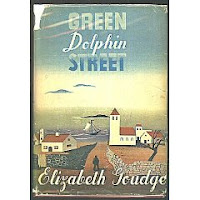 502 pages
Published 1944
Coward-McCann, Inc.
New York, NY
I first learned of Green Dolphin Street (a.k.a. Green Dolphin Country) by Elizabeth Goudge as a teenager from an older married woman in my church. She claimed it was her all-time favorite novel. On this recommendation I read it, but didn't like the book. I couldn't for the life of me figure out why she thought it was so wonderful.

Now fast forward some 13 or 14 years and one of the women in my book club suggested we read and discuss Green Dolphin Street. She said she'd recently read it and found it to be one of the best novels she'd ever read on the subject of marriage and true love. Hmm... I thought, I might re-read this book and see if my opinion has changed. So I re-read it and now you get to hear my revised thoughts.

The Plot:
Green Dolphin Street is divided into four books and each book is divided into parts, with a different character of the story taking the central role of each part. The story itself spans the course of 45 plus years (from the early to mid 1800s to the late 1880s), two continents, and follows the adventures of three very different people and a supporting cast of unusual characters. The plot is very thick and thus a little difficult to summarize. I will do my best to outline it without giving away the best of the story.

As the story opens the reader finds themselves on the small channel island of St. Pierre, off the coast of England and France, during the early-mid 1800s. It is here that the reader is introduced to two very different sisters -- Marianne and Marguerite Le Patourel. Marianne is 16 and is described as an "elfin creature...totally without the beauty that distinguished her parents...with a passionate temper and brain that was too quick and hard and brilliant for her years and sex." Marguerite, on the other hand, at the age of 11 is already a "dimpled" and "fair beauty" with a bubbly personality, tinkling laugh, and a vivacious love love for life and desire for the happiness of those around her.

It is at this time that the two sisters meet the third and last central character of the book, one William Ozanne, age 13. Immediately Marianne sets her mind to win William as her own. But at the same time the reader realizes that it is not Marianne, but Marguerite with whom William has a special bond and is destined to fall in love. (The plot thickens...)

As the story progresses the children grow into young adults and their personalities become more defined. Marianne becomes a chic young woman with a quick mind and a quick tongue. She is very driven and adventurous and determined to get her own way, particularly when it involves the future of William. Marguerite has grown in beauty and is still a lover of life and laughter. William is likewise a lover of life, but too lazy in Marianne's opinion. Nevertheless, it becomes clear to everyone that William and Marguerite love each other... but unforeseen circumstances (and a little manipulation on Marianne's part) prevents William from professing his love to Marguerite before sailing off with the Royal Navy. (The plot grows thicker...)

While in the Far East William is tricked and robbed and ends up missing his boat, which leads him to accidentally go AWOL from the Navy, and in turn makes him a fugitive from his own country. With nowhere else to go William sails to a small colony in New Zealand to start his life anew.

A few years pass and with something of a job and home established, William finally writes the letter to request the hand in marriage of his one true love. But there's just one problem... In a drunken state of love, loneliness, and liquor William mixes up the sisters' names and accidentally asks for Marianne instead of Marguerite! (The plot thickens even more!)

But what of Marguerite? What will happen to William and Marianne? The rest of the story plot I leave to the reader to discover for themselves as that is the best way.

My Thoughts:
I have so many thoughts... For starters, the reason I hated this book as a teenager has to do with the fact I considered the story "broken" -- William and Marguerite were supposed to end up together... not William and Marianne! But as an adult (and perhaps being a married woman myself?) my perspective of this novel has changed. I realize that this story is not a predictably perfect romance, instead it is something more. On its face it is a beautifully unique tale of adventure and love in a time and place where the world was undergoing great change. But at a closer look it is also a somewhat upside down love story; it is a tale of true love, self-sacrifice and the journey to true happiness by letting go of what we want most and finding strength to do what we must. It is no fairytale, but it is very life-like.

One thing that has not changed is how I feel about Marianne. I didn't like her when I was a teenager and I still don't like her. But then, she is a very difficult character to like. She's got the tom-boy adventurous spirit that the modern girl appreciates, but she's also a very manipulative and selfish person. (Much like Scarlet O'Hara of Gone With the Wind or Becky Sharp of Vanity Fair, though I don't think Marianne is wicked like Becky Sharp was.) Marianne's spirit definitely drives the story, but there are so many other characters that the reader meets along the way whose impact upon each other and upon Marianne (just like in real life) makes the story come alive.

To add to this, Green Dolphin Street is jam-packed with Biblical symbolism and subtle lessons. Lessons about loyalty and friendship, true love in marriage, finding God in both the darkest moments as well as the most beautiful, and how selfishness brings hopelessness and loving sacrifice brings freedom. Throughout the story the reader can really see the ebb and flow of the main characters' spiritual and emotional lives.

Ms. Goudge is a beautiful writer. Some of the members of my book club complained that her writing was flowery and tended to make the story drag. But I didn't find this to be the case. Perhaps it helped that I'd read the book before and new how it would end, but either way, I just drank up her descriptive prose. Such imagery! Such depth! (Watch for such a quote next Tuesday as part of my Tuesday Teasers.)

There is so much more I could say about this book, but I will close with this. Green Dolphin Street is a worthy read. The ending is bitter sweet, but beautiful. There is much I took from this book and I highly recommend that you add it to your reading list. This is definitely a book that should be in print and be read! On a scale of 1-5, 1 being horrible and 5 being excellent I would rate Green Dolphin Street a 5. A book to read and perhaps even own (which I do!).

--------
Note: In 1947 Hollywood adapted this book to the screen starring Lana Turner and Donna Reed. I've not seen the movie, but have heard that it is little like the book. It did win an Oscar for "Best Special Effects" I'm curious why that is. Maybe some day I'll get a chance to see the movie.

Thanks for this. I really enjoyed reading your thoughts here. It would be a great read. thanks once again.

This will definitely be put on my list! Sounds just like the type of book I love!

I have very fond memories of this book which I read as a teen. As a young adult I tried it again, but lost interest at one point. I have never gotten rid of the book, though, and may soon try again.

I agree with you about the writing. I can still picture some of the scenes in my mind, and I continue to be fascinated with the Channel Islands.

I've seen the movie, but I'm sure I'd like the book much more. Goudge is one of my favorite authors.

I discovered this book just last weekend and couldn't resist buying it. Really looking forward to reading it especially after your review which I skimmed but will pop back and comment properly once I've read the book.

Glad you enjoyed it - it sounds wonderful 0:)
Tracey