Before we reach the end of October and in turn the end of the Maud Hart Lovelace Reading Challenge I thought I'd share a few quotes, facts, and links about these books and their much beloved author. Enjoy! 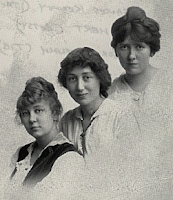 - The real Betsy (Maud), Tacy (Bick), and Tib (Midge) were all present in Mankato for the celebration of Betsy-Tacy Day, October 7, 1961.

- The first four books in the Betsy-Tacy series (Betsy-Tacy, Betsy, Tacy and Tib, Betsy and Tacy Go Over the Big Hill, and Betsy and Tacy Go Downtown) increase in reading difficulty so that the child reading can grow up along with Betsy, Tacy and Tib. Likewise each of the last six books in the series (Heavens to Betsy, Betsy in Spite of Herself, Betsy Was a Junior, Betsy and Joe, Betsy and the Great World, and Betsy's Wedding) increase both in vocabulary difficulty and in content.

- The Betsy-Tacy series began in the form of bedtime stories that Maud told her daughter, Merian.

- Maud originally planned to stop the series after Betsy and Tacy Go Downtown, but her husband, Delos and daughter, Merian changed her mind. It happened around 1944 when Maud received from

her parents a box of her high school memorabilia, which included her diaries. Initially Maud was embarrassed and found them silly and "full of slang and boys, boys, boys." She immediately dismissed the idea of using any of them for potential story plots, but eventually changed her mind after one evening when she overhead Delos laughing. She went into the living room to see what was so funny and discovered him reading her diaries. He said to her: "Maudie, these are rich. You must take Betsy through high school."

(Note: the house pictured above-right is where Maud and Delos lived at the time she was writing the Betsy-Tacy books. All the books, but Betsy's Wedding were written and published while at this home.

- According to the original publisher of Betsy In Spite of Herself, "the Betsy-Tacy series might never have been written if Mrs. Lovelace were not, among other things, one of the most unflagging diarists since Pepys..." (The Betsy-Tacy Companion, page 174)

- Maud titled her diaries "Comedy of Errors" for her freshman year in high school, "Much Ado About Nothing" for her sophomore year, "As You Like It" for her junior year, and "All's Well That Ends Well" for her senior year. They were all subtitled "Monkeyshine of Mankatoman."

- Even though nearly all of the people, places, details and adventures contained within the Betsy-Tacy books are based on facts and actual people, places and events in Maud's life there is a variance between the fictional world and the real world. For example, Betsy meets Joe when they are both entering their freshman year of high school. But in real life she didn't meet her husband until they were both adults. Click here to learn more about The People of Deep Valley(a.k.a Mankato), Minnesota. Or click here to learn more about The Places in Deep Valley (a.k.a. Mankato).

- The working title of Betsy's Wedding was actually Mrs. Betsy.

- It was well noted by friends and family that Maud and Delos had an extraordinary successful marriage. A couple days after their 14th wedding anniversary Maud was quoted as saying:

"Delos and I are mutually agreed that marrying each other was giving the perfect answer to life."
- Maud considered a few times about writing another Betsy-Tacy book to follow Betsy's Wedding. Maud was quoted as saying once, "In Betsy's Wedding, Betsy's husband went off to the First World War and many letters have begged me to bring him safely home. The letters even offered me titles for another book, obviously in the friendly assumption that when a writer has found a title he is over the hump. Welcome Home, Joe! was suggested by one. Many have asked for Betsy's Baby. And some have even hit upon the title I have selected myself, Betsy's Bettina." Unfortunately though she tried to research and write another book in the series it just never worked out and by the 1970s Maud gave up the idea entirely. In the end she said, "I have always felt that the last lines in Betsy's Wedding were a perfect ending for the series." The only other documented time that Maud might have played around with adding to the series was in 1971 when she penned a two page short story (unpublished) titled, Betsy and Tacy Go Over the Big Ocean: The Last Story.

- For those wanting to know what happens to Betsy and Joe after the war, Maud cleared things up:

"Most of the letters I get ask two questions. And I always answer them personally to tell the girls that Joe does come back from the war and they do have a daughter they call Bettina." (Maud Hart Lovelace, Minneapolis Tribune, August 25, 1965)

- Although both Maud Hart Lovelace and her husband, Delos W. Lovelace were both authors (Maud short stories and novels and Delos newspaper articles, short stories, novels and biographies) it is Maud whose name is most recognized by today's readers. That being the case it might come as a surprise to learn that Delos not only authored a number of books, but was the author of one of the most infamous thrillers, King Kong. The novel King Kong was written and published in 1932 as a tie-in to the 1933 film by the same name. For a time the novel was credited as being authored by Edgar Wallace and Merian C. Cooper (who were both involved in the making of the film), but today Delos receives credit for his role in making a gigantic ape one of the world's most famous monsters.

- As a side note, Merian C. Cooper was a close friend of Maud and Delos, he and Delos had roomed together in college. The Lovelace's were so certain their second child born in 1931 would also be a boy that they did not pick out a girl's name. (Their first child, a boy born in 1925, died a few hours after birth.) When they discovered they had a daughter, but no name they settled on naming her Merian, after their friend Merian Cooper. 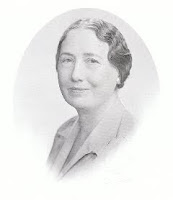 - The Lovelace's once entertained Rose Wilder Lane, daughter of another Minnesota author, Laura Ingalls Wilder. Maud served jellied chicken.
(Note: The picture to the right of Mrs. Lovelace was taken in 1948 while in the midst of writing the Betsy-Tacy books. It is said to be Mrs. Lovelace's favorite portrait of herself.)
Want to know more about Maud Hart Lovelace and the world of Betsy, Tacy and Tib?

First, if you own any of the recently reprinted Betsy-Tacy books you will find some wonderful tributes to the books and their author in the form of Forwards by well-known 21st century authors such as Ann M. Martin, Judy Blume, Frances Hurwitz and the like. The books also include a Post Script section complete with photographs, biographical information, and a "where are they now" section.

Several of those books can also be found at the Besty-Tacy Society Gift Shop. And speaking of which, the Society's online Gift Shop is the place to go for anything Bety-Tacy-Tib or Maud Hart Lovelace related. From books by or about Maud Hart Lovelace to t-shirts, jewelry, stationary and book marks, and a slew of other memorabilia. All proceeds go to the future maintenance of the Betsy-Tacy museum.

And last, but certainly not lest. For the parents, teachers, or book club leaders out there who are looking for help in sparking discussions about the Betsy-Tacy books with young readers or members of a book club, be sure to check out HarperCollins Publishers website. They have posted reading guides to the first two books in the Betsy-Tacy series: Betsy-Tacy and Betsy, Tacy and Tib. The reading guides include story summaries and questions.

The above picture is a copy of the wall mural that can be found in the Maud Hart Lovelace wing of the Minnesota Valley Regional Library in Mankato, Minnesota. As described in Ken Berg's book, A Tribute to the Young At Heart: Maud Hart Lovelace, the mural "depicts Deep Valley and Betsy-Tacy characters as envisioned and painted by Marian Anderson."

---------------
Disclaimer: Please note that the content of this post is a combination of some original content by the author of this blog and a great deal of compiled quotes and facts from various Betsy-Tacy and Maud Hart Lovelace sources, including some of the above listed titles. The photographs likewise were compiled from various sources, but mostly from the Internet, and do not belong to me. The author of this blog received no compensation for this post, it was done purely for the fun of sharing the information with other readers and helping keep alive the treasure that is the Bety-Tacy series.

What a fun post! I've had so much fun with this challenge--so far I've read the first four books but I have the rest waiting for me, so hopefully I'll get to them soon.

Thanks for all the wonderful little tidbits.

thanksfor all this great information. i just got my first betsy-tacy book and am looking forward to it!

Wow, this is an AWESOME compilation of Lovelace facts. Thanks so much for taking the time to put this all together. Superbly done!