All About Agatha - Part II 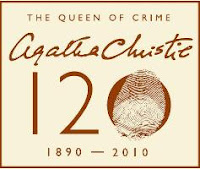 When I decided to write twice for the Agatha Christie Blog Tour I originally planned to make my final post a Q&A of sorts -- or at the very least I thought it might be a "Did you know" type post that was full of fascinating and little known details about one of the most famous authors of all time. To help with my writing I began my research. I decided I needed to read a biography on Agatha Christie... And that's when I discovered something even better -- her autobiography!

Some people may think it's rather narcissistic to write the story of your own life, but I don't agree. Who better to tell about your life, your experiences, thoughts, conversations, and memories than you? Yes, you might be tempted to paint yourself in a better light than some objective researcher, but there is the indisputable fact that they will never be able to capture on paper the emotions and memories that you have unless you previously expressed them.

From page one of Agatha Christie: An Autobiography I was immediately captivated. Her writing is light and refreshing, interesting and descriptive. Unlike some autobiographies and historical nonfiction pieces this book is a page-turner. Each time I picked it up I felt as though I was stepping through the pages of time and seeing historical events unfold through her eyes as they happened. At 519 pages it is a very thorough, though admittedly not entirely complete story (she leaves out any reference to her infamous disappearance). Still, the result of this large volume is a book that masterfully weaves together a personal life story with first hand accounts of life in a time and place so completely foreign to life when the memoir was published in 1965 (and even more so today in 2010).

Agatha Christie, when referring to her own memoir said:

And so it is from the first page to the last I found Agatha Christie: An Autobiography absolutely fascinating. And safe to say probably one of the most fascinating reads I've picked up all year.

Here are some of the highlights:

* Agatha Christie had a vivid and very creative imagination as a child. She reminded me a lot of the fictional Anne in L. M. Montgomery's Anne of Green Gables, only with a happier childhood.

* As a child she loved math and problem solving, story telling and reading. Much to her mother's horror (who thought it bad for the eyes for a child to read before the age of 8), Agatha taught herself to ready by age 5. All these are just glimpses of gifts that would help her later in life.

* The Prisoner of Zenda by Anthony Hope was Agatha's first romance read. She was completely smitten with the poor king imprisoned in the dungeon. During this age she had many impossible crushes, including one on the young and handsome King Alfonso of Spain. (Yes, this is the same King that Betsy, Tacy and Tib fall in love with in Maud Hart Lovelace's Betsy and Tacy Go Downtown). Later these crushes bloomed into opportunities for true love. Agatha relates what life was like in an era when ladies hid their ankles and kissing was saved for only those in a serious courtship.

* Agatha was an avid reader all her life. She enjoyed Dickens and claimed Bleak House was her favorite of his works. She also was a great fan of May Sinclair and claimed that she was "one of our finest and most original novelists... I cannot help feeling that there will be a revival of interest in her some day."

* She gives a descriptive and interesting narrative of life in an upper-middle class British home in the early 20th century. The details of marriage and family life, of a young girl's education, friendships and courtships, and the interaction of master and servant. It is an era and a people now long gone.

* As a child Agatha's nanny taught her etiquette. Agatha wished to one day be "Lady Agatha," but Nanny said that she could never be -- you have to be born a Lady -- little did either of them know that little Agatha Christie (nee Miller) would one day be both Dame Agatha AND Lady Agatha.

* Agatha took music lessons and sang a little opera. She was once told she was good enough to become a concert singer if she so desired, but she lacked the strong lung capacity needed to sing opera professionally.

* Although Agatha Christie is now a world-famous author it was her sister, Madge, who was initially considered the "writer" in the family having published several short stories in Vanity Fair magazine. But Agatha's fate was sealed the day her mother suggested she take up writing. Sick and bored in bed, Agatha began a story which she finished a mere 24 hours later. It was titled The House of Beauty and she later recalled, "I think on the whole that it is good; the first thing I ever wrote that showed promise... Amateurishly written, of course, and showing the influence of all that I had read the week before. This is something you can hardly avoid when you first begin to write. Just then I had obviously been reading D. H. Lawrence..." (Pt IV, Chpt 5, pg 181)

* Agatha began plotting her first detective novel (The Mysterious Affair At Styles) while she worked in the hospital pharmacy during World War I. It was partially because her sister said she couldn't do it (they were just too difficult to write) and partly because she was bored that she even began plotting the story. It was also at this time that she gained her vast knowledge of poisons, something that would later come in handy in her career as a crime story writer. And it was the Belgian refugees who fled to England during this time that inspired her most famous detective, Hercule Poirot.

* After World War I, Agatha and her first husband, Archie Christie did a little globe trotting. They left their daughter with Agatha's sister and traveled around the world, stopping over in South Africa, Australia, New Zealand, Hawaii, and Canada. During their time in South Africa and Hawaii Agatha and Archie spent many hours surfing. (Imagine Dame Agatha Christie on a surf board!)

* In the years leading up to World War II and post World War II Agatha spent a great deal of time in the Middle East. Her second husband, Max Mallowan was an archaeologist. She drew from her life with him and used it in several of her books both as Agatha Christie and under her pen name Mary Westmacott. Because she loved this part of her life so much she even wrote a short little book about their experiences titled Come, Tell Me How You Live.

* One of their archaeologist friends pressured Agatha to write a historical detective novel, something set in ancient Egypt. Hesitant at first Agatha eventually gave in and with the assistance of this friend she researched and then wrote her only historical fiction novel: Death Comes As the End.

* Agatha did not like that she had to include a romance within her mysteries and thrillers. She felt it was forcing a "love motive into what should have been a scientific process" and it went against the grain. So why did she include them? In that era it was expected for that genre. Personally I am glad, I've always loved that aspect of her thrillers.

* Contrary to rumors that she wrote her final Miss Marple and Hercule Poirot books for the insurance of future money, she actually wrote them during World War II and gifted the proceeds of the books to her daughter and husband upon her death. She was certain she would be killed during the war as she spent so much time in London. In the end these two novels were not published until her death in the mid 1970s.

* Agatha once said she was inspired every day, every where in every way. Sometimes ideas came when she was eating lunch and overheard a conversation. Other times she was looking in a shop window. Clearly she had her eyes wide open and her mind constantly engaged. She was alive and alert. Everything in life had the potential to influence or be a story.

To me it is no wonder Agatha Christie has won the title of "Queen of Crime"and is considered the all-time best-selling crime writer. She was an interesting person who led a full and fascinating life. She had a spectacular imagination and was a gifted storyteller. Whether you are like me, a fan of Agatha Christie's novels, or just a fan of the mystery genre in general, or even someone who is merely interested in learning more about life in England and Europe during the first half of the last century then you really should read Agatha Christie: An Autobiography. It is most definitely a worthwhile read.

I too used Agatha Christie's autobiography in my post for this tour. I think it's a great book - full of fascinating information, not only about the facts of her life but also about her thoughts and feelings. She had the most amazing life!

Thanks so much for your post. I have been hearing wonderful things about this book!

Great review! Though I love Agatha Christie's books and have read practically every one, I've never felt compelled to read her autobiography. But your review makes me think I've been missing out.

Thanks for all that - I think I'll have to hunt out her autobiography now. What a fascinating lady, and of course, a fantastic writer.