We're in the home stretch, it's the final week of October and thus today is the start of our final give-away for the Maud Hart Lovelace Reading Challenge.

One lucky reader will win a Betsy-Tacy themed book bag/tote:

The tote is 12"x 11" and fits three or four books depending on thickness. The front includes one of Vera Neville's illustrations from the Betsy-Tacy "high school and beyond" books and information about Book Club Girl's blog. The back includes a quote from Betsy and Tacy Go Downtown. (I have one of these bags passed on to me by a blogging friend and I LOVE IT!)

To win this tote you must:
1) Be a participant in the Maud Hart Lovelace Reading Challenge.
2) Be a resident of the USA. (Sorry, next year I'll make plans to extend the challenge.)
3) Be reading or have read a book by Maud Hart Lovelace during the month of October.
4) If you blog you should have a post reviewing your experience posted by no later than Saturday, October 30th.
5) Leave a comment with a link to your post by or before midnight on Saturday, October 30th.

ote is courtesy of Jennifer (a.k.a. Book Club Girl), an avid reader and blogger; fan of Maud Hart Lovelace; and the Vice President, Associate Publisher for Harper Perennial and Harper paperbacks at HarperCollins Publisher. Jennifer is also the one who donated the brand new copies of Emily of Deep Valley and Carney's House Party/Winona's Pony Cart for this challenge.

As such I thought it would be fascinating to learn more about Jennifer's own history with these wonderful books and what it took to bring them back in print for a whole new generation of readers. And who better to interview then the lady who helped make it happen: Jennifer Hart! 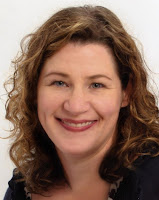 Library Hospital (LH): When did you first encounter the Betsy-Tacy series and/or Maud Hart Lovelace?

Jennifer Hart (JH): My mother was an elementary school teacher and the librarian at our church so I grew up surrounded by books. She introduced me to Betsy-Tacy when I was pretty young and I re-read the first four books for years and dreamed, like Betsy, of being a writer. I wrote a newspaper about our street as well as stories, and I dyed sand and put it into bottles. If I had been brave enough to climb a tree, I too would have had a cigar box nailed to a branch with my writings inside. It wasn't until I was about 12 that I discovered Heaven to Betsy and I remember so clearly opening it up and the excitement I felt to find out that Betsy's story continued, and that she too was becoming a teenager, just as I was. Plus, with the now grown up illustrations by Vera Neville, it looked as though Betsy was achieving a prettiness and elegance I longed for at that age. Honestly, I was giddy.

LH: What inspired you to get HarperCollings Publisher to reprint the Betsy-Tacy and Deep Valley series?

JH: It was during a Library Lovefest blog talk radio interview between our Director of Library Marketing Virginia Stanley and librarian Nancy Pearl (link to 5/1/2008 show) that I learned that the high school and beyond books (as the final 6 books in the series are called) were no longer available. I mentioned this to my boss, the publisher of Harper Perennial, and it was she who suggested we reissue them as Harper Perennial Modern Classics, a line that includes such classics as To Kill a Mockingbird and A Tree Grows in Brooklyn.

That summer before the first set of reissues came out, I attended my first Betsy-Tacy Convention in Mankato, MN and met hundreds of passionate fans just like me. I sat on a panel with Carney's granddaughter and Cab's grandsons and was struck even more with the historical significance of these books. And I heard from many fans that Emily of Deep Valley was their favorite of all of Maud's YA books. So, as I left Mankato (aka Deep Valley), I felt that our work wouldn't be complete without bringing the three books in the Deep Valley series back into print as well.

For the high school and beyond books, we largely picked up the existing books and the back matter that had been prepared for their last reissue. And we added forewords by Meg Cabot (Betsy was a Junior/Betsy and Joe) and Laura Lippman (Heaven to Betsy/Betsy in Spite of Herself). The foreword by Anna Quindlen had been written some years back. All three of these acclaimed and bestselling writers were so generous with their time in writing the forewords and then helping to promote the reissues.

What was exciting for me about the Deep Valley reissues, in addition to procuring fabulous new forewords by the writers Melissa Wiley and Mitali Perkins, was that I could build the back matter from scratch, as nothing had been previously published in the backs of those three books. Julie Schrader, the former executive director of the Betsy-Tacy Society and author of the amazingly comprehensive book, Maud Hart Lovelace's Deep Valley, provided wonderful background material on Emily and Winona, as well as a new bio of Maud. Amy Dolnick, who wrote a book about Carney's House Party called, Future in a Handbasket: The Life and Letters Behind Carney's House Party, provided the background material about Carney. I was even able to sneak my own name into that book, as I took a photo of Carney's sleeping porch while in Mankato that is included in the back. And Teresa Gibson, who gave a presentation about Vera Neville at the convention, wrote a wonderful essay about the illustrator and the books include that along with a photo of Neville-about whom very little has been written or known.

And Melissa and Mitali have been so generous of their time and their promotional power, I couldn't have asked for better collaborators on this set of reissues, or the last.

LH: If you had to pick just one Maud Hart Lovelace book as your favorite which one would it be? And why?

JH: This is always such a tough question. I guess it would be Heaven to Betsy, as I just love that introduction to the first year of high school. But Betsy and the Great World also shares a special place in my heart. I love going along on Betsy's travels and the ending makes me cry every time.

LH: Who is your favorite Deep Valley character and why? And who do you most identify with within Maud's books?

JH: Betsy of course -- because I identified with her as a child, a teen, and now, as an adult raising my own children, I can see how well Maud "got" the teenage years.

LH: If you could ask Maud Hart Lovelace one question what would it be?

JH: I'm curious about the gaps between some of the books - most notably between Betsy and Joe and Betsy and the Great World. A LOT happens in those intervening years, most notably the breakup and Betsy's brief college career, and I'm curious why she chose not to write about them.

LH: What has been your funniest or best experience since your involvement in republishing these books?

JH: Meeting so many fellow fans - first at the convention and now daily on the very active Maud L listserv of fans**, I certainly no longer have that "I thought I was the only one!" feeling when it comes to Betsy-Tacy fandom. It's been amazing to work with Melissa Wiley and Mitali Perkins and to meet people like Kathy Baxter -- a diehard fan who actually made it into the high school house before it was torn down and who met "Carney" and Maud. Now when I go home to NH, I almost always see new friends from the New Betsys group in New England, during ALA this summer I was able to relax one evening at the home of another fellow fan, and at mid-winter ALA this winter I hope to meet up with others as we try to search out the site of Uncle Keith's orchard. And I can hardly wait for the next Betsy-Tacy Convention that's being planned for the summer of 2012.

~*~
Once again I would like to thank Jennifer Hart (and HarperCollins Publishers) for the donation of the Maud Hart Lovelace books (three Betsy-Tacy books in 2009 and two Deep Valley books this year) to the Maud Hart Lovelace Reading Challenge. I would also like to extend my thanks to Jennifer for giving away one of her cute little totes for this week's give-away and for taking time out of her weekend to share some of her own Betsy-Tacy memories, thoughts, and the story of the reprinting process. Most of all thank you to Jennifer and her colleagues at HarperCollins Perennial for working so diligently until the Betsy-Tacy and Deep Valley books became once again available for readers everywhere. Thank you for not letting them become just another reading treasure lost in the passage of time.

**Maud L Listserv: The Maud Hart Lovelace on-line discussion list is an electronic mail discussion group focusing on all things Betsy-Tacy as well as conversations of more general interest. This is not a Betsy-Tacy Society sponsored list but many members subscribe to it. To subscribe, send an email to listserv@listserver.mtsac.edu and put Subscribe Maud-L in the body of the message space. Make sure to type Maud-L with a capital L, and do not sign your name or put any other text in the message space. You'll receive a welcome message with further instructions shortly after you send your email. For further information go to The Betsy-Tacy Society Links page.
Posted by Sarah M. at 8:03 PM

I love to hear about passionate readers having an impact on the publishing industry: I'm so glad this series is back in print. (And I'll be a bit sorry when October is over.)

I truly loved this challenge! My {wrap-up} post is up on my blog! http://bookandyarn.blogspot.com
Thanks so much for this giveaway and for hosting this challenge!

That was really neat to read all of that. Thank you for sharing!

Thank you for the great giveaway, too!

Thanks so much for hosting this challenge and sharing so much great information about Maud Hart Lovelace over the month. My post about Betsy was Junior is at:

My niece is only 2 and now I can't wait until she is old enough that I can share these books with her.

Hi Sarah
Here is the link to my wrap up post. I really enjoyed reading more in the Betsy Tacy series. Thank you so much for introducing me to this author.